I was introduced to archaeology by Michael Green (H.J.M. Green) an Inspector of Ancient Monuments at the then Department of the Environment, latterly English Heritage. I was perhaps five or six. After washing pots for him and combing the spoil heaps for bones (I still have a boar’s tusk I picked up) I gained permission to dig in my parents’ garden. We lived in Godmanchester, a small Roman town in Cambridgeshire. Michael’s excavations had slowly been revealing the town gates, mansio, baths, forum and other buildings. My hole found a rubbish pit at the back of either a shop or a house. This exciting experience encouraged many summers of digging in our garden and eventually a full-scale excavation of our lawn under which was the town’s basilica. 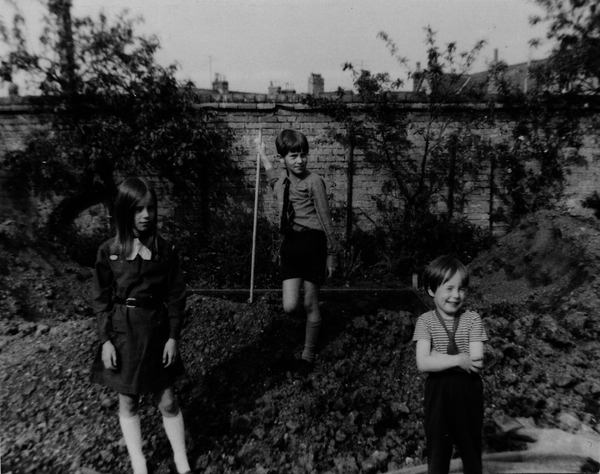 After finishing my History degree Michael suggested that I look at the archaeology of royal palaces – an area he knew well and thought contained much scope for research. He introduced me to Daphne Ford (then Hart) at English Heritage who took me round Hampton Court and showed me how to record a standing building. While I was doing my MA, and then my PhD, I worked for Michael in the English Heritage offices helping him write up an important excavation he had conducted in and around 10 Downing Street in the 1960s. This was published under our joint names (see bibliography). Daphne was kind enough to help me with the archaeological aspects of my MA at Hampton Court too – this was also published in due course.

Thus I became well-versed in the archaeology of archaeology going on to write up the very complex excavations that had been undertaken at Whitehall Palace and publishing them with Yale University Press in 1998. I did do a bit of digging, especially during the Fire Damage work at Hampton Court, where Daphne and I excavated Tudor walls beneath the Wren building.

However my modest contribution to archaeology was much more in terms of methodology. I was determined to see a greater integration between the traditional disciplines of below ground archaeology, building recording and documentary research. This is still a specialised area, but in my work at Historic Royal Palaces and in my own scholarship I always sought to blend evidence from both below and above ground archaeology with the documentary record. It was this that has underpinned all my scholarly work.

It also underpinned my professional career. At HRP the historical recreations we did were all based on extremely rigorous scholarship. Our curators melded a very wide spectrum of evidence to inform our proposals. Always at the heart of this was what the building itself told us.

At the Museum of London the opportunities for archaeology were huge. We had MoLAS what was then the country’s largest commercial archaeological unit – 180 staff working, in 1999, on 300 projects. I had the pleasure of appointing Taryn Nixon to lead our team and we gathered together a stellar group of people to do the work.

There is no way that I could summarise the work we undertook in the four and a half years I was responsible for MoLAS because it was a boom construction period and we were involved in a huge amount of excavation. The Roman woman we excavated at Spitalfields was certainly a highlight, but so was the hoard of 43 Roman gold coins we excavated at Plantation Place, a 13th century Mikveh (Jewish ritual bath) and Roman waterwheels at Blossom’s Inn. In 1998 we walked through a perfectly preserved prehistoric forest on the foreshore at Erith. In 1999 we dug a huge site in Southwark where we found a Tudor fish farm made of the walls of old boats. In it we found what we thought at the time was a Tudor banana skin. Later that year we found three bottles of unopened wine in the buried cellar of the master Gunner’s House in Spitalfields dating to before 1682. We got together the Masters of Wine from Christies and Sotheby’s and got them to drink some. I had a sip too. It was Madeira apparently. In 2000 the remains of a female gladiator was excavated in Great Dover Street, Southwark. This was a rare type of cremation called a Bustum and the grave goods (a series of oil lamps) depicted gladiatorial images. 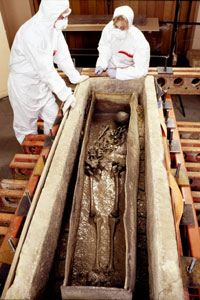 We generated a huge amount of interest in the opening of the coffin of a young Roman lady in 1999. In the end I was on the BBC Radio 4 Today Programme three days running a fact that was lampooned by Private Eye on 30 April

We rejuvenated our publication programme and published under our own title 15 major archaeological monographs, a rate of more than four a year – the programme, supported by English Heritage, cost £500k annually. We put together a new research framework for London which we published in 2002. Rescue archaeology was all very well, but we wanted to keep our eye on what were the big questions that needed answering. We developed joint MAs with both the Institute of Archaeology and Royal Holloway College and set up a new research centre at Eagle Wharf Road in Hackney to make available our site archives to researchers. We relocated all the Museum’s archaeological functions to the new building in February 2002. All this helped the bottom line. We were successful in both increasing turnover and reducing overheads and profits in 2002 reached £500,000 while our reserves stood at £300,000.

At English Heritage Archaeology continued to be a priority for me both in the practical business of managing and presenting the National Heritage Collection, but in the development of policy. In particular I was keen to see developer archaeology move from a reactive, inward looking activity, to one in which the results of commercial investment in research can be synthesised and made available to the public. The National Planning Policy Framework enshrined this in national planning guidance.

I am also very interested in archaeological archives and feel frustrated that English Heritage we were not been able to do more to help with the huge problems of deposition. At the Museum of London, of course, we created our own store. But an attempt to help Kent with their huge archive failed. I contributed a major report to the Mendoza Museum review highlighting the issue of archaeological archives.

At English Heritage we developed the National Heritage Protection Plan an analytical tool that has directed investment in research towards the areas that are the greatest priority and those areas in which other organisations, especially the universities, are not active. 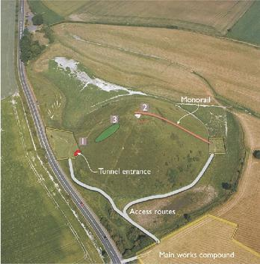 Despite more than a decade of cuts English Heritage managed to retain a critical mass of archaeological expertise at the centre for archaeology at Fort Cumberland and in local offices amongst our outstanding Inspectors of Ancient Monuments. We brought in-house our archaeological science advisors who are really important in advising local archaeological curators. We also built up the London SMR and the scientific dating team is amongst the best in the world.

All this has meant that English Heritage was able to continue to investigate and care for its own sites and monuments. I am particularly proud of the work we did to stabilise Silbury Hill that resulted in both a popular book and a major scholarly monograph.

Latterly I have returned to my interest in the archaeology of monarchy and have been working on a monograph on St. James’s Palace. I have also been advising the Norfolk Archaeological Trust.